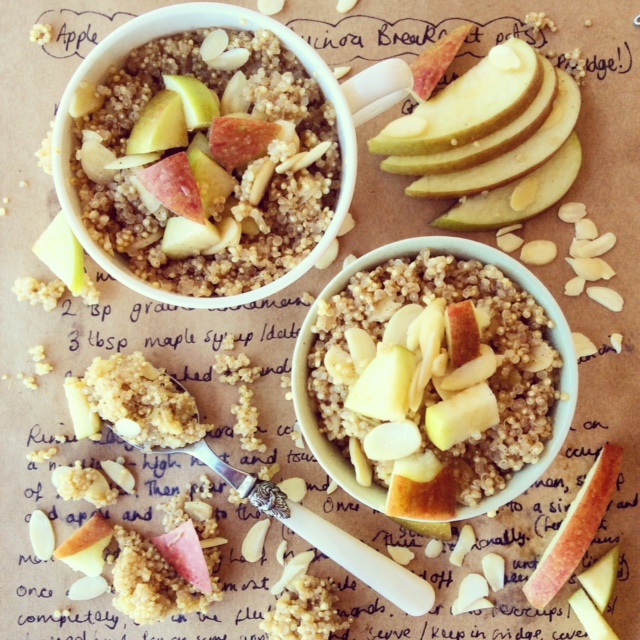 These Apple and Almond Quinoa Porridge pots were born out of boredom. I LOVE oats, porridge and cereal, but wanted to switch breakfast up a bit. I didn’t want to break too much from the norm, just a slight variation and quinoa seemed to fit!
Quinoa is pretty spesh – naturally gluten free, jam packed with iron, vitamin b, calcium, vitamin e and a load of fibre. Surely no better way to start the day??
I make these hot like porridge and consume immediately, but you can make them in advance, pop them in the fridge and eat cold in the morn – they will dry out though, so you will need to splash some more milk on in the morning. I say morning, but I’ve also eaten an Apple and Almond Quinoa Porridge pot as a snack….or, as one of my favourite saying indicates, why not – ‘breakfast for dinner’

Makes about 4 large teacups/2 bowls (depending on how hungry you get in the morn!)

1) Grate half of your apple (skin on) and chop the other half of the apple into small cubes. Set aside.

2) Throughly rinse 200g of quinoa in cold water. Once done, pour the quinoa into a large saucepan and pop on a medium-high heat to toast for a couple of minutes.

3) Next pour in the almond milk, water, cinnamon, syrup/honey and the apple (leaving a few little cubes to the side for decoration at the end) and bring to a boil (best to pop the saucepan lid on until it boils). Once boiling, reduce the heat to a simmer and move the lid off the top slightly, so it has a bit of breathing space. (I.E. so it’s only half covering the top). Leave this to simmer for 20 minutes, stirring occasionally, until the liquid has almost all been absorbed.

4) Once the liquid has almost gone, take the lid off completely and stir in the flaked almonds, leaving a few to the side to decorate the top. Pour into your desired bowl/teacup and pop the remaining apple and almond on top, with a cheeky drizzle of your favourite syrup.

There you have it – Apple and Almond Quinoa Porridge – jazzing up your morning routine!