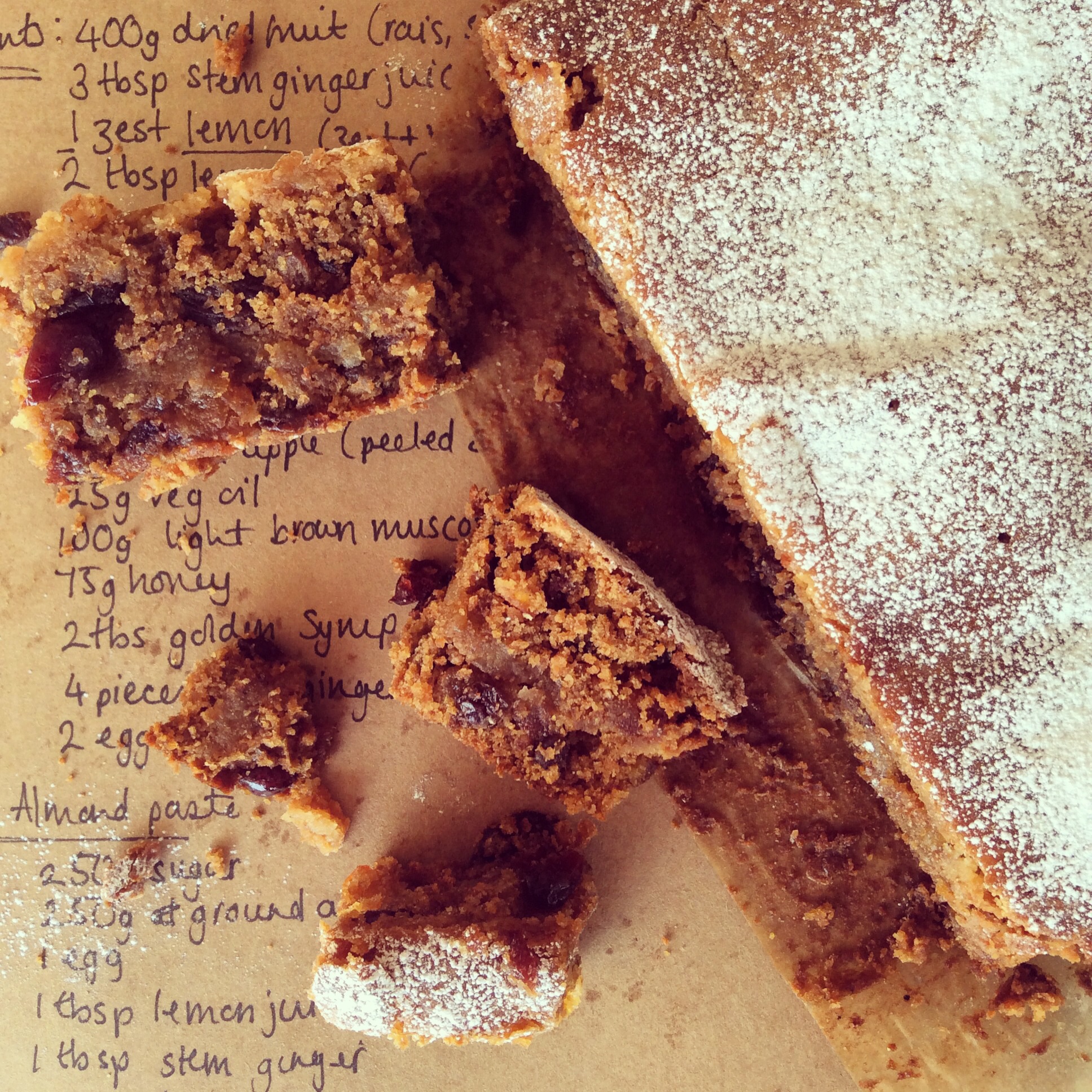 This ‘Healthy Alternative’ Easter Simnel Traybake is basically Christmas cake for Easter. With a bit less effort.
I’ve given up chocolate for lent, so wanted to make something with an Easter vibe that wasn’t covered in it. Don’t get me wrong, as soon as Easter Sunday arrives I’ll be having chocolate for breakfast, lunch and dinner. However, for the time being, I wanted something traditional, with a lighter twist. I’m also a bit of an old soul and drool over the thought of fruit cake. So here it is.
I use the term ‘lighter’ as I’ve cut out the butter, used wholemeal flour instead of white and reduced the amount of refined sugar, but this is by no means ‘light’ – it’s as stodgy as it looks, and perfect with a cup of something hot, but maybe you don’t have to feel so guilty when going for a second slice.
Traditionally, a simnel cake has 11 balls of marzipan/almond paste to represent the Apostles (12, but minus one for Judus) I didn’t add this though, it looked weird on my square traybake and there’s already plenty baked in. Call me Judus.

for the almond paste

A little icing sugar to decorate

1) In a medium bowl mix together the dried fruit, 3 tbsp stem ginger syrup, lemon zest and 2 tbsp of lemon juice. Make sure everything is evenly coated and set aside.

2) Make the almond paste. Combine all the ingredients from the almond paste list into a medium bowl. Whisk until everything is incorporated then use your hands to bring it all together into a big ball. Cover with cling film and pop in the fridge.

3) In a medium bowl combine the wholemeal flour, ground almonds, nutmeg, mixed spice, cinnamon and baking powder. Mix until everything is evenly dispersed and set aside.

4) In a large bowl pop in the grated apple, oil, sugar, honey, golden syrup and grated stem ginger and whisk until everything is combined. Then lightly whisk in the eggs, one at a time.

6) Pour half your batter into your prepared baking tray.

7) Remove your ball of almond paste from the fridge and cut it in half. On your kitchen surface roll out a sheet of baking paper and dust with wholemeal flour. Put half of the paste onto the baking paper and dust with more flour as well as the rolling pin (The almond paste is sticky so it will need quite a bit) Then roll out the paste into a thin sheet, about the size of your baking tray. Once rolled, use the baking paper to help you manoeuvre it on top of the batter in your baking tray. Make sure everything is covered and trim the edges.

(Traditionally, you do not put this last layer of almond paste on top, you leave it until it has cooked, then place it on at the end and grill it for a minute. But I like mine a bit chewy, so put it on now, but do whichever suits your taste!)

9) Pop in the pre heated oven on the middle shelf. After 45 mins place foil over the top so it doesn’t brown too much. Then it’s back in the oven for another 45 mins. It’s done when a skewer inserted comes out clean and the edges have browned.

10) Leave to cool in tray for a good half an hour (you don’t want melted almond paste seeping all over the place). While still warm spread a little stem ginger syrup on top. Then remove from tray and leave to cool completely on a wire rack. Dust with icing sugar to decorate and cut into desired sized slices.